When I was a senior in college the realty of graduation was dawning on me. I knew I wanted to teach at the college/university level, so I would need to go to graduate school. I haphazardly took my GREs and began applying to different schools. I was accepted into a Ph.D. program that was very far away from home.

At first, I was incredibly excited to be moving/starting graduate school. However, once the semester began, I slowly realized that I was terribly unhappy in that graduate program. I was in denial for a few months, hoping that each small change would somehow magically “fix” everything. I began to understand that maybe my current school was not a good fit for me. During my third semester, I had decided in my heart to leave. Immediately after leaving, I was able to find a job with my undergraduate degree in order to save up money for moving back home. I also applied to a different Ph.D. program to test if it was graduate school that was the issue or if the previous program I was attending was the culprit. It certainly was by no means easy to come to such a life-changing decision, but I can say that I am extremely happy that I did. My current program is much more agreeable, and I am near the end of my graduate career there; something I do not believe I would have been able to accomplish at my previous institution. There were several factors that allowed me to make that leap, which I have discussed below.

1) Financial security: Make sure that your exit strategy is as beneficial as possible. You need to be financially secure. I was fortunate and able to obtain employment during my transition period. Once I had secured that job, it alleviated some of the stress of switching programs as I did not have to worry about how I was going to take care of my financial responsibilities.

2) No bridge burning: When I was certain that I was going to leave my first program at the end of my third semester, I talked to my graduate advisor. I told him that I was terribly unhappy and that my mind was made up to leave. He wished me well, but also attempted to get me to stay. I knew though that I had enough, and was determined to leave. I finished my teaching responsibilities, attended my classes, and at the end informed the graduate chair that I was finished with the program. It is important to keep these things in mind when switching, as some graduate assistantship contracts require that you finish out the semester.

3) Pull from your network: Ask those around you for help/advice. When I was deciding on switching schools, I contacted professors from my undergraduate intuition and was completely honest about my current situation. Graduate school is not for everyone; having the outside opinion really helped bring clarity to the situation. I also relied on them when deciding on where to apply for my new program. Explaining what I was unhappy about allowed them to provide useful advice about the alternative programs I was interested in.

4) Be honest with yourself: This is often very difficult in life; being able to examine your situation objectively leads to better decision making. When I took the time to stop and really look at my life, I knew that I did not want to be at that institution anymore. It was personally very difficult for me, as I felt that I was “failing” despite my best efforts to make it work. Life is not always easy though, and planning my next steps alleviated some of that anxiety and fear.

5) Learn from your past, but don’t let it define you: I was a bit jaded when starting at my new university, but slowly with the help of family, my advisor, and awesome lab mates, I have learned to let it go and focus on the now.

Finally, I just want to say that it eventually does get better, you just have to be brave enough to make a change. At the end of the day, you are the only one who has to live your life. 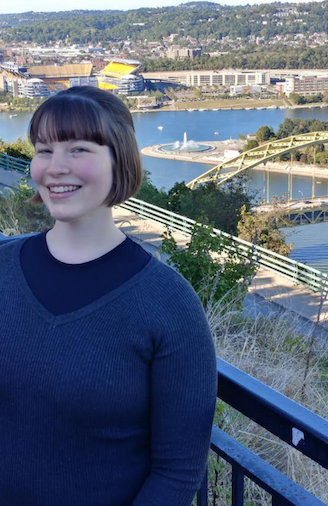 Ashley Blystone is a fourth-year graduate student at Duquesne University. Ashley received her B.S. in chemistry from Westminster College in New Wilmington, PA. She is a member of the Younger Chemists Committee, serving on the communications subcommittee.